Legend has it that Patanjali compiled and codified the yoga sutras. The yoga sutras (sutra translating as thread) is considered the fundamental text for practising and living yoga and not just in the sense of asana but with regards to the full eight limbs. Those limbs being yama, niyama, asana, pranayama, pratyahara, dharana, dhyana and samadhi. Remember the recent post about one of the limbs, the yamas? 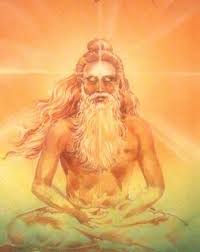 Patanjali compiled 196 sutras or concise aphorisms that are essentially an ethical blueprint for living a moral life and incorporating the science of yoga into your life. Although no one is sure of the exact time when Patanjali lived and wrote down his sutras, it is estimated this humble physician (who became one of the world’s greatest and most well known sages) roamed India somewhere between 200 BC and 200 AD and that his birthplace was a celestial abode called Ilavrita-Varsha and his mother being Sati and father, Angiras (one of the ten sons of Brahma).

The verses are interconnected and all related together, hence their namesake of sutra (thread). ‘The scripture is regarded as the most precise and scientific text ever written on yoga,’ Four Chapters on Freedom.

He was said to be able to communicate since birth and was believed to be an incarnation of the mythical endless serpent, Ananta. The tradition runs that upon his birth he made known things past, present and future, showing the intellect and penetration of a sage while yet an infant. He married Lolupa, whom he found in the hollow of a tree on the north of Sumeru, and is said to have lived for many, many years. It was also claimed that he once reduced a group of Bhotabhandra residents to ashes by fire from his mouth after being insulted by them.

It was believed he had a variety of talents that included being a physician, dancer, medical intuitive, philosopher and grammarian. There are many uncertainties and skepticism shrouding what Patanjali actually achieved. Given his suspected parentage, he was an accomplished dancer that created classical traditions of dance styles still performed today in India and he is regarded as the patron saint of dance but it is a given in the yogic community that he was the one to package up yoga in the sutras we follow in most yoga lineages today. Although he did not create yoga he was instrumental in bringing it to the world.

Did you know? Patanjali can be roughly translated as ‘falling from heaven’, ‘offering sacred knowledge coming from the heart’ or ‘falling into folded hands’. Read more here.

Some people even purport that Patanjali also wrote a treatise on Ayurvedic medicine with a focus on diagnosis of disease and drugs, the structure and function of the human body and its fitness and its aesthetics.

Often called the “father of yoga”, there is still much mystery surrounding Patanjali and some facts and information have been misinterpreted or diluted over the years, not too dissimilar to that of another legend of man we may be familiar with: Jesus and his teachings.

One thought on “Patanjali: the legend”