Chakra may now be a common term to you and you may even have an understanding of its meaning. 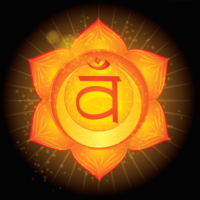 (energy or lifeforce). A useful analogy when considering chakras is to envision nadis as highways, filled with cars (prana) and the chakras are the intersections and roundabouts where these highways meet.

The chakras reside on the sushumna nadi, which is the central channel of energy that is aligned with the spinal column.

This chakra is located between the navel and the base of the spine, just above the base chakra. It is here we dwell and is the energy place of Shakti. Whilst the base chakra gets our material needs in order, the sacral chakra then allows our emotional nature to be attended to.

Ruled by Vishnu (the preserver of the Cosmos) svadhisthana guides our inspiration to create, not just artistically and with personal projects but the biggest act of creation – procreation. It presides over our fantasy via the arts, crafts, entertainment and imagination, our sexuality and sensuality, intimacy and emotions and our ability to give and receive equally in balance.

The water element leads this chakra; water being considered the essence of life and linked closely to the tides which are affected by the moon. It also governs the water (fluids) in the body and the resulting body’s processes including circulation, urination, menstruation, sexuality and tears.

This is where the unconscious and emotions reside, and emotions, like water, are fluid, ever changing provides us with the ability to accept change and go with the flow of life. ‘When we relax our resistance to life, our hips let go, our reproductive organs become less tense, and we’re open to experiencing our sensuality and sexuality,’ Yoga Journal.

The yantra is typically depicted by six orange petals, each representing mistrust/suspicion, indulgence, disdain, delusion, pitilessness, all destructiveness. Sometimes, when prana doesn’t flow as well in this area these qualities can become more prominent and perhaps overbearing. Often there is a crescent moon in the centre of the yantra and can be accompanied by an alligator like creature.

Svadhisthana encourages us not to rush decisions but to allow the answers to bubble up from your core in their own time.

Here are some practical ways that you can increase the vitality of your sacral chakra:

Asanas that focus on this area:

Emotion always has its roots in the unconscious and manifests itself in the body. – Irene Claremont de Castillejo